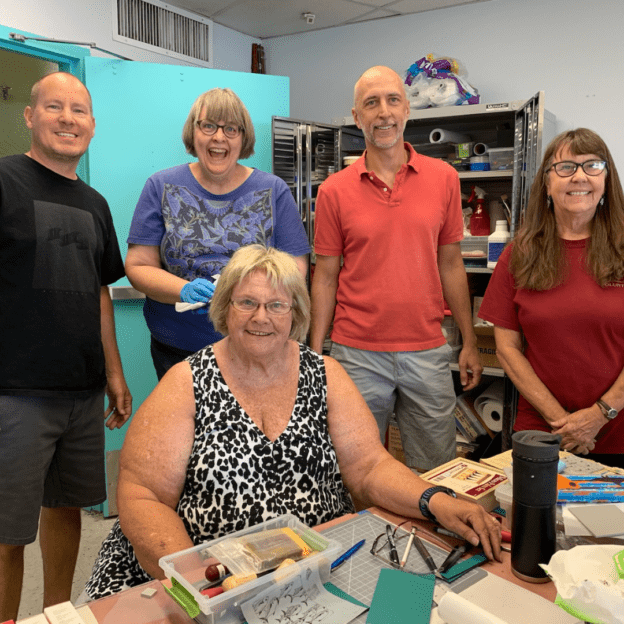 What advice would Wendy Willis give to all the budding artists out there: “Take classes!”

This is just one of the reasons we are celebrating Wendy as she announces her retirement as the Printmaking Department Head at Phoenix Center for the Arts. Wendy began working at the Center in 2010, after almost 15 years of taking classes at the Center.

Wendy shared how she started, “In 1995, I worked for the Street Transportation Department, and we had a meeting at the Center. I saw a flyer for a life drawing class and I signed up. Even though I hadn’t drawn since 1971, I nailed my first gesture drawing. The negative voice I last heard in ‘71 was gone and a new voice said ‘look what you can do’!”

Over the years, Wendy continued taking classes at the Center, and in 2002, she retired from her City job, and became a full-time artist. Her start as a teaching artist with the Center began with a beautiful collaboration. The Center was looking to build its printmaking department, and Wendy was eager to share her skills with others. So Wendy moved her printing press into the Center, and thus began her time inspiring the creativity of others at Phoenix Center for the Arts and Thunderbird Arts Center.

As an artist, what she loves most is “getting lost in the making.” Also, “the reveal of lifting the paper off the plate after running it through the press. It is magical.” In her role as a teacher, Wendy is excited how students can be successful right away. “It makes me so happy to see them learn about the mediums and be proud of what they have accomplished.”

Wendy’s favorite memory of the Center? “I took figure painting from Marlys Kubicek, and over the course of a few semesters, we became friends.” She continues, “I told her I was interested in printmaking, she suggested we take David Manje’s classes. We did that for a couple years and I learned that I was a printmaker. So my best memory is of becoming friends with Marlys, one of my best friends to this day. When I became the Printmaking Department Head, it all came full circle.”

Even before the pandemic hit, Wendy says she was ready to retire due to family health issues that took away from the time she could focus on art. The staff, students, and volunteers at BOTH Centers will miss her as part of the team and wish her all the best in her retirement. Her parting words of encouragement?

“I have met the most wonderful people, some of my best friends, in the classes I have taken. It helped to have a buddy, like Marlys, but even alone, I made friends and learned so much. Try a variety of mediums, you never know if making jewelry, printmaking, or painting is your thing. Say yes! Even if you’re unsure.” Wendy has taken arts classes all over the Valley, but says, “I started at Phoenix Center for the Arts, and it will always have my heart.”