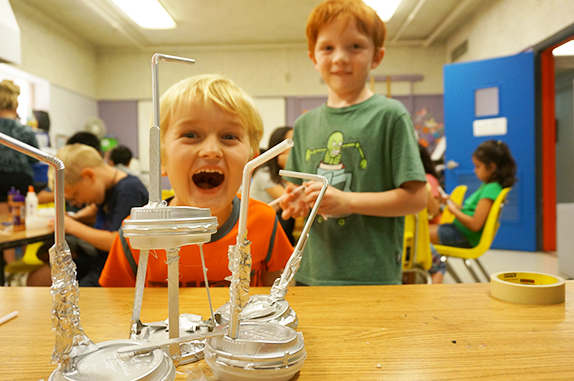 This week with Miss Antoinette, our campers explored with one of the fundamental principles of art: space. Miss Antoinette first began by asking the kids what comes to mind when they think of the word “space. “ She then continued to explain the concept of depth and dimensions. Miss Antoinette drew attention to the fact that placing certain objects farther away can achieve the illusion of actually being in the canvas, adding another dynamic to your picture. The campers then used this information in creating their own spaceships using plastic coffee lids, straws, popsicle sticks, pipe cleaners, ribbons, and rhinestones. After the kids were done building their projects, Miss Antoinette would spray paint the individual pieces a metallic silver color. The next project will involve wooden panels, which the kids will paint to depict their own galaxies.

A camper builds a spaceship

With Miss Jessica, our campers used the techniques of marbling and splatter-painting to create mixed media collages. The kids used toothbrushes to flick a thin film of white paint (resembling stars) onto blue and black construction paper (resembling a sky). Next, Miss Jessica sprayed a pile of shaving cream onto each of the campers’ desks, which they smoothed out with popsicle sticks, and swirled with paint. The kids then pressed a clean sheet of paper on top of their mixtures, leaving them with a cool marbled design from which they would create their “planets.”

The campers also made their own miniature alien puppets and an accompanying back drop. They cut around the inner rim of a paper plate, and folded it back to create a UFO-like formation. They then colored and cut out paper aliens, which they glued onto popsicle sticks, for their puppets.

Q&A with a summer camper:

Why did you choose the colors you did?

Why did you decide to add three eyes on each alien?

“Just because I like those kinds of aliens. They’re cute.”

In theatre with Mr. Derek, our campers brainstormed themes for their upcoming performances on an “Idea Board.” Mr. Derek intended for this activity to be high-energy and filled with laughter, encouraging the kids to pitch any and all suggestions. The excitement seemed contagious, as most of the campers who were shy at first eventually opened up and became active participants. The kids also worked on “Three-Word Skits,” in which Mr. Derek assigned each group a series of random words, which they would weave into a cohesive storyline. He told the campers to think about what emotions they wanted their audience to feel when presented with their skit, and told the kids to make a conscious effort to incorporate those emotions into their plot. After their performance, each group would receive feedback, to ensure they would know exactly what to improve upon for next time.

Campers getting ready to perform their skit

A group receiving feedback on their play

What the campers seemed most excited about, however, was creating their own commercials. They worked in small groups to come up with the foundations of their advertisement, including a name for their product, its price, where to buy it, a telephone number/website, and a jingle. Then, using the props Mr. Derek had laid out on the table, they presented their skits in front of the class.Image