Phoenix Center for the Arts 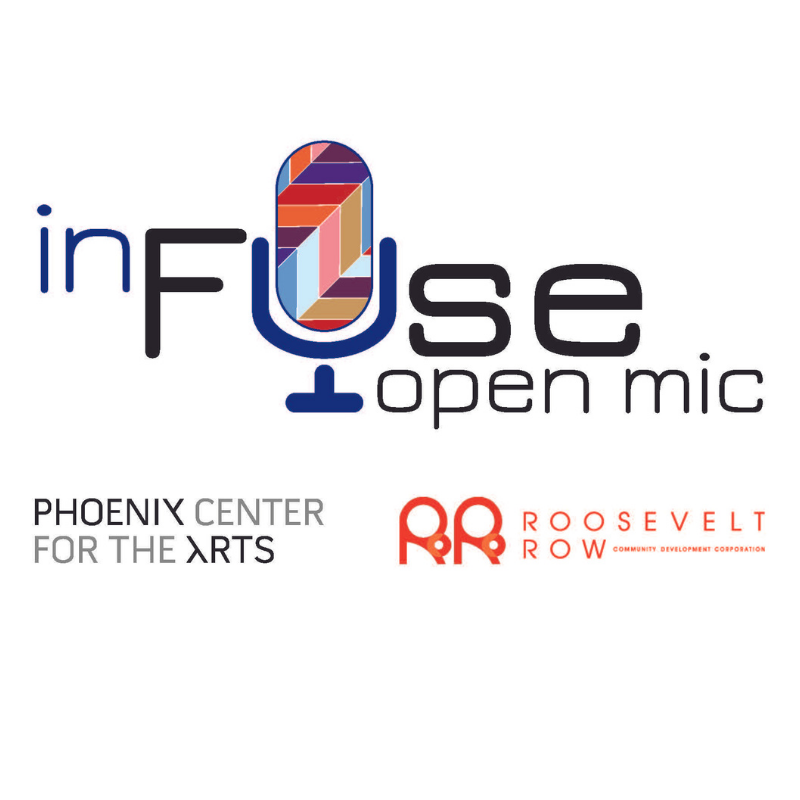 Phoenix Center for the Arts is excited to share that Infuse Open Mic will return to the Third Street Theater on Sunday, May 22, 2022 from 6 to 8 p.m. In partnership with the Roosevelt Row Artist Advisory Council, this Phoenix favorite open mic night will return as a free event that welcomes every kind of creative expression, from artists of all ages.

On hiatus since March of 2020, members of the public have been reaching out, asking for Infuse to return. Known as a free open mic night hosted by local artists for local artists, the event is community-focused and open to everyone, no matter what age or artistic medium. Started by Jason Lalli in 2011, in partnership with Phoenix Center for the Arts, Infuse Open Mic was created to provide a safe and welcoming space for both amateur and professional artists to hone, share, and perfect their art.

Lalli described Infuse Open Mic as, “a place where creativity can flourish, positivity is bred, and respect brings a community together. Where the Human Element infused with ART exposes the heart of the valley through a diverse variety of performances. Poets, Dancers, Musicians, Vocalists, Comedians and anyone with a performing art can come and showcase their talent.”

While Lalli decided to not continue his involvement with Infuse due to personal reasons, he shared his blessing for Phoenix Center for the Arts to take the reins, and continue Infuse to offer artists a place where Lalli said they can, “Come partake in the beauty of Arizona exploring the art of self-expression.”

With this comeback event on Sunday, May 22, Infuse will celebrate its 10th Anniversary. The evening will be hosted by representatives of Roosevelt Row and Phoenix Center for the Arts, with artists from the Roosevelt Row Advisory Council setting the lineup and entertaining the audiences with music before and between sets. Doors will open at 5 p.m. for artists to begin placing their names on the performance list.

Chris Stone, local musician and leader of the Roosevelt Row Artist Advisory Council will be part of the relaunch. “I’m so proud to be a part of Infuse, as it was the place where I was introduced to the Phoenix art community.” Stone continued, “After attending my first open mic, it led me to meeting several artists throughout the Valley, which has inspired me to continue the journey of music after nearly a 20 year hiatus.”

Phoenix Center for the Arts is excited to bring back this community event, and invite local budding artists back on stage at the Third Street Theater. Infuse Open Mic will continue its practice of remaining an all-ages open mic event, where artists are invited to sign up for a 5-minute performance slot during the evening. Phoenix Center for the Arts CEO Sandra Bassett stated, “It’s important for the Center to continue the legacy that Jason Lalli had begun with Infuse, and remain a community resource for artists to grow and showcase their talents.”

Following the May event, Infuse Open Mic will return to its traditional second Sunday of the month schedule starting with June 12. Additional details on the return of Infuse will be shared on the events’ community Meetup page. Phoenix Center for the Arts, in partnership with Roosevelt Row, invites all artists, poets, musicians, spoken word authors, jugglers, puppeteers, you name it, to join us for an evening of performance art, by artists, for artists.