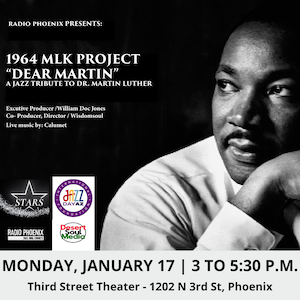 1964 MLK Project “Dear Martin”: A Jazz Tribute to Dr. Martin Luther King Through The Eyes of a Jazz Musician

“JAZZ IS TRIUMPHANT MUSIC” –  are the words of Dr. King in his opening address for the 1964 Berlin Jazz Festival.

These words resonate within the vision of William “Doc” Jones as he sets the tempo for the celebration of Dr. King an iconic figure that pushed forward humanity and the music that surrounded, lifted, led, and shook the consciousnesses of souls around the world. International Jazz Day AZ Foundation, founded in 2015, is an Arizona-based non-profit 501C3 organization led by William ‘Doc’ Jones, founder, executive director, and a professional jazz musician and music educator.

“Music has the power to unite people across borders, and Jazz has been doing that for years,” said William ‘Doc’ Jones. “The 1964 MLK Project is a tribute to the respect and love Dr. King had for the contribution Musicians made to the Civil Rights Movement.”

The debut presentation of the First Annual 1964 MLK project, “A Tribute to Dr. King,” is incredibly proud to join forces with Desert Soul Media to be a part of this celebration. On January 17, 2022, at the Phoenix Center For The Arts Third Street Theater, there will be a spectacular cast in place. The proceeds from the concert will go towards supporting Radio Phoenix programming.

William ‘Doc” Jones says his mission is to make live music available to the next generation. “Jazz has the power to transform lives. We believe that it helps us listen, express, and create. We partner with Charter schools and community organizations in Arizona to develop jazz programs. We want to make it a reality.”