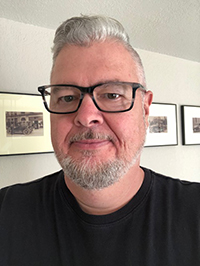 Originally from the East Coast, Ted earned a bachelor of science degree in industrial design from the University of the Arts in Philadelphia. His background includes diverse roles in the arts. As part of the executive team at Scottsdale Arts he oversaw the marketing for the Center for Performing Arts, SMoCA and Public Art. Ted also served The Art Institute of Phoenix as director of communications, where he helped young artists and designers explore career options in the arts. While at The Art Institute, he lead the outreach efforts and formed many partnerships with nonprofits and community leaders. Currently, as the community arts curator, he manages a variety of art shows including the Student Art Series and the Thunderbird Art Works. In his free time, Ted enjoys creating new forms in clay as a ceramics student at the Center.